It wasn’t clear if it was art imitating life – or life imitating art at Northern Stage on 18 February as the nation’s favourite Prime Ministers [?] moved left, right, forwards and backwards, while attempting to strategise over the ‘B’ word (that’s Brexit – not Boris).

Journalist and playwright Jonathan Maitland’s latest creation: The Last Temptation of Boris Johnson, touched down in Newcastle tonight – after its sell-out run at London’s Park Theatre – and the packed house loved it. 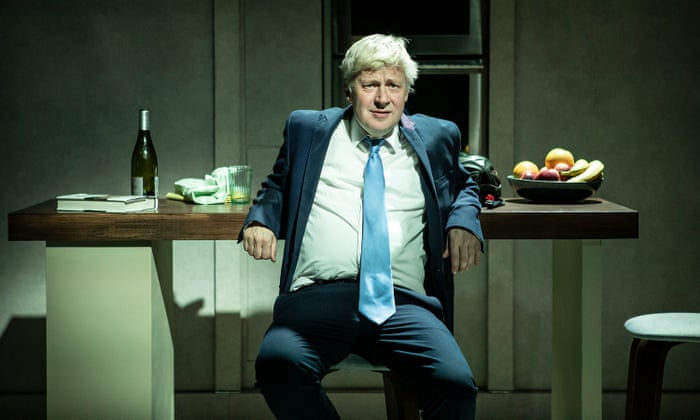 The play centres on Boris Johnson’s wiffing and waffing four years ago, as he agonised [possibly] over whether to come down with Leavers or Remainers.

Although it can be argued ‘The Dinner Party play’ has been done to death, one particular get-together over a few bottles of Châteauneuf du Pape and some Jamón serrano at a certain North London address in Feb 2016 – is still having seismic ramifications for all of us – and seeing it deconstructed on stage was actually quite sobering.

This was the evening Johnson and then-wife Marina Wheeler entertained the Goves and Evening Standard mogul Evgeny Lebedev. (Try not to think too much about the KGB.) Apparently, Mr Johnson was quote: ‘Veering around like a shopping trolley’. Thankfully, spectral interventions from Mrs Thatcher (who took command of white goods like only she could) along with Wiff-Waff Commandant-General Churchill and a very popular Tony Blair (let’s put aside that dodgy dossier) – led Boris to come to the right/wrong (delete as appropriate) decision.

Will Barton expertly inhabits the role of Johnson – and so he should – he previously turned in an accomplished Boris in 2019, for BBC2’s Theresa V Boris. The blonde hair and middle-age spread were spot-on.

The brilliant Emma Davies captivates with her seamless transfers between Thatcher, Sarah Vine and Chief Whip, while Tim Wallers, (who probably won’t be appearing in The Windsor’s any time soon), is quite simply brilliant as Evgeny Lebedev, Tony Blair and the pugilist Huw Edwards. As Wheeler – and a future BoJo squeeze, Claire Lichie plays with aplomb two very different women, both with eyes on the same prize. Bill Champion is uncannily Govian – and ‘fights them on the beaches’ as Churchill.

Maitland is confident he’s created something that unites Leavers and Remainers. Bless. That’s Independent Education confidence for you. Luckily tonight on Tyneside, laughs not lunges ruled the waves – and although I’m sure many went home trying to reconcile what appears to go on at the heart of the ‘Establishment’ with their own Northern-Powerhouse existence, it is fair to say that a peek behind the net curtains of one of Islington’s swankiest Georgian town houses, proved to be the basis for another first-class night of theatre at Northern Stage.