Whether you were born and bred in Gods Own County – or are an ‘Offcumden’, I would go to the top of our stairs if you couldn’t tell me that August 1st means just one thing: Yorkshire Day.

You might don a white rose (or grow one), for this special occasion. You might even fly a Yorkshire flag from your washing-line post (or flag pole – if you’re posh), but how much do you actually know about the origins of our world-famous and much-coveted celebration? I recently put this to shoppers in Leeds Kirkgate market: “Is it to celebrate Dickie Bird’s birthday?” It would be understandable to think so, but we don’t dance in the streets because we’re celebrating Dickie’s birthday (not on August 1st anyway – we do that in April). Other suggestions included Yorkshire’s independence and one young Mum asked: “Have the Chuckle Brothers got anything to do with it?”

Let’s first of all go back to the eighteenth century. Prince Ferdinand, the Duke of Brunswick commanded an allied force that was tasked with halting the march of not one – but two French armies. He’d apparently just returned from a long-weekend in Bridlington and had been impressed not only by Les Dawson at the Spa, but also the resilience of the local folk – who fished, no matter how bad the weather. (That last bit may not be factually 100% accurate – but stay with me).

Anyway…thankfully, under his command he had soldiers of the Kings Own Yorkshire Light Infantry – and as these gladiators from ‘Up North’ approached the town of Minden (twinned with Sutton, Surrey – eh?), they picked white roses that were in bloom and decorated their tunics and headdresses with them. The battle of Minden took place on August 1st, 1759 and was a victory for the allies – and ever since, members of the KOYLI’s (now part of the Yorkshire Regiment), have worn white roses in their caps on the anniversary, to remember those who fell in battle.

Let’s fast forward to the early 1970’s. Like many other things at the time, local government was changing. The Local Government act of 1972 proposed to abolish the existing administrative counties and county boroughs – replacing them with new local authority areas. Confusion and anger reigned amongst residents across the country, who overnight in 1974, often found their homes on the other side of a ‘county’ boundary. The folk of Barnoldswick, previously proud inhabitants of the West Riding of Yorkshire, became part of a new ‘Borough of Pendle’ – and with it an expectation that a further ‘War of the Roses’ should be avoided. People weren’t happy – and in many spots around the three Ridings, where boundary changes suggested the inhabitants were no longer ‘Yorkshire’, signs proclaiming otherwise can still be seen today.

One group determined to preserve the historical importance of the original system to our part of the world, was the Yorkshire Ridings Society. They met in 1974 and following fish, chips and mushy peas – washed down with a pint of Tetley’s (possibly not – but that’s how I imagine it), they decreed that from 1st August 1975, that date should become ‘Yorkshire Day’. Champions of anything and everything that makes Yorkshire special, they took preserving the integrity of the North, East and West Ridings’ to heart. They’re not alone: “Tha’ll not rub out ‘awer a thousand years ‘o history, while I’ve a breath in me body” – Robert, a Dales farmer, told me recently at Hawes Auction Mart. “It were the bliddy Vikings’ who gave us the Yorkshire Ridings – an no London type’ll change that!”

In previous years, members of the society have gathered in York on August 1st to read a ‘Declaration of Integrity’ at four of the Bar’s – or gates into the city. You can try this at home:

“I, ALBERT HIGGINBOTTOM, being a resident of the West Riding of Yorkshire declare:

That Yorkshire is three Ridings and the City of York, with these Boundaries of 1134 years standing;

That the address of all places in these Ridings is Yorkshire;

That all persons born therein or resident therein and loyal to the Ridings are Yorkshiremen and women;

That any person or corporate body which deliberately ignores or denies the aforementioned shall forfeit all claim to Yorkshire status.

These declarations made this Yorkshire Day 2018. God Save the Queen!”

This year, while many of us will be marking August 1st in our own particular way, Ripon – Yorkshire’s smallest city, is set to be at the epicentre of festivities. You’d have to go a long way to find someone who’s more passionate about her town – and Yorkshire, so for Mayor Cllr Pauline McHardy, hosting this most special day for her county, is a perfect fit. She’s brought together a crack team to ‘blow the socks off’ visitors. “We want to really show off what Ripon has to offer” – she tells me, as I join her, along with City Clerk Paula and ‘Discover Ripon’ specialist Sheila. “There’s going to be something for everybody.” 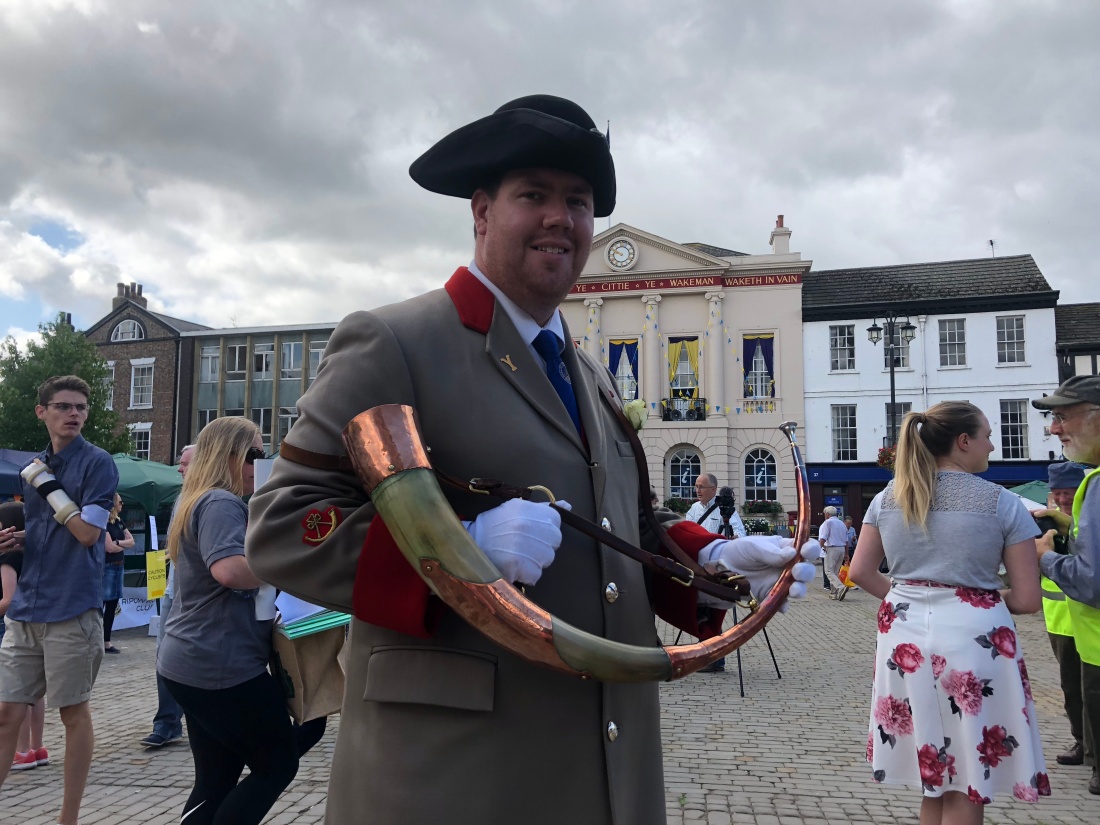 A Civic Procession of dignitaries from all corners of Yorkshire, decked out in their finest regalia, will start the day. The procession heads through the City, from the Spa Hotel, via Westgate, the Market Place, then along Kirkgate to the Cathedral for a special service. While the county’s civic leaders give thanks in ‘the Cathedral of the Dales’, there’s so much planned for the rest of us: The Market Place itself will be filled with amusements and activities for the kids, market stalls selling the very best Yorkshire produce, storytelling and re-enactments. Ripon Photographic Society will also be hosting a photography competition which is open to all.

In the evening there’s set to be entertainment on the square, with lots of live music, including the Ripon City Band. Cllr McHardy is very proud of one particular element of the evening: “At 9pm we’re having a special one-off Hornblowing ceremony – with all four of the City’s Horn-blowers around the obelisk – and the evening will then culminate with a Yorkshire Day themed firework display.” At the same time, the Cathedral will be hosting a ‘Picnic int’ Park’ in the Dean’s garden. And the fun doesn’t end once the sun goes down – Ripon remembers its patron saint St Wilfrid on August 4th and there are lots of events planned for the week. Given the fact that we’ve got a beautiful city, surrounded by gorgeous countryside – and a green light to shout about our Yorkshire pride, I’m sure we’re in agreement that all roads should to lead to Ripon this Yorkshire Day!